Nespresso and Keurig are the biggest players in the pod-based coffee industry. It wasn’t that long ago that almost no one had either Keurig coffee maker of a Nespresso machine but today they are very common.

If you are new to automatic single serve coffee makers then you may be excused for not understanding the difference between Keurig and Nespresso. Although they both are similar they are in fact quite different.

Although both coffee brewing systems are similar in their ease of use and level of automation the actual coffee or espresso produced taste quite different and are typically considered to be inferior to their manual counterparts.

Let’s go into greater detail on what make these two styles of coffee so different and popular despite their obvious shortcomings in quality.

Make sure to also see this comparison of Nespresso to Real Espresso to learn how it’s not exactly the same thing. You can also see this post on the differences between Keurig coffee and drip coffee to learn more about how it’s also a bit different.

What’s So Special About Keurig Coffee Makers? Why They’re So Popular

The Keurig System uses special cups, known as K-cups for brewing coffee. These are widely available in just about any supermarket nationwide and you can buy just about any brand to use with any k-cup coffee maker you might own. 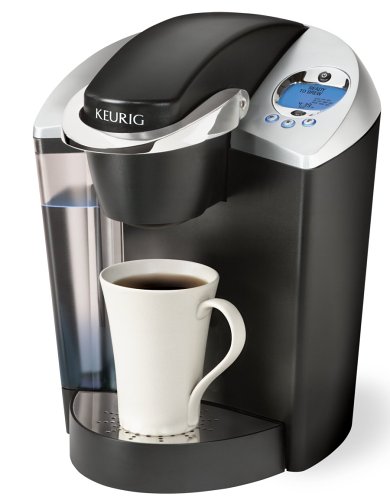 You don’t even have to brew coffee with them.

Companies have branched out into many different flavor circles to make different types of k-cups ranging in flavors from Lemonade, to Chai Latte, to French vanilla, just to name a few.

One of the best things about Keurig these days is that third party companies are free to produce just about any type or kind of k-cup they can imagine. And given the fact that Keurig has not limited it’s licensing like Nespresso has, a lot of companies have come out with Keurig compatible products giving you an enormous amount of choice.

As for the coffee produced in k-cups it does tend to be on the weak side however because the brewers are limited by the size of the pre-measured, pre-packaged k-cups which can usually only hold a little over 12 grams of coffee grind which isn’t really enough grind to produce a good cup of coffee over 6-ounces or so.

Basically a Keurig brewer will pierce a hole in the top and the bottom of a k-cup allowing hot water to pass through the grounds on the inside which are frequently housed in a small filter pouch. This is why Keurig so closely resembles drip coffee or other forms of filtered coffee.

This is similar to how Nespresso machines work except that gravity feed the water into the cup with Keurig and high-pressure forces the water through Nespresso capsules which are considerably smaller than k-cups.

Make sure to see this post to see how Keurig and pour over coffee can differ only a little or by a lot. You can also see this post comparing Keurig coffee to French press coffee, two styles that are very different in a lot of different ways.

Nespresso pods make small portion sizes because the coffee is meant to replicate the coffee produced in a traditional espresso maker which is far more potent and rich than standard drip coffee. 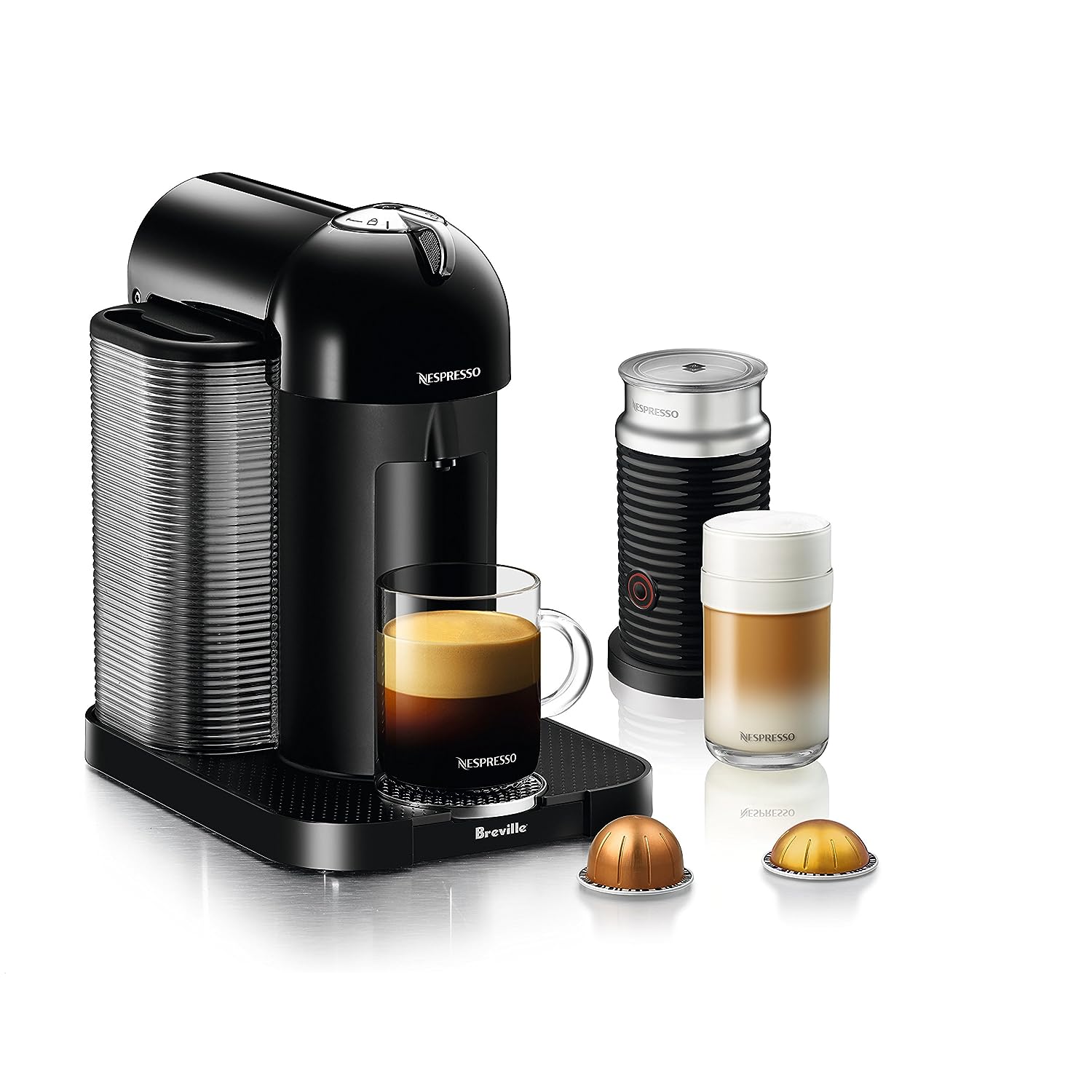 Nespresso has capitalized on the gourmet home espresso market where simplicity and ease of use is valued over all else. For people that don’t want the weak coffee that is frequently found coming from Keurig machines Nespresso offers a great way to make a strong double shot, Americano, or Lungo that can rival places like Starbucks.

See this post for the difference between Lungo, Espresso, and Rostretto.

Being one of the newer products available in the market Nespresso has been very successful. Initially developed by Nestle, they now produce espresso machines and accessories themselves preventing third party brewers from being produced. Pods on the other hand are made by anyone so you can be sure about the quality of the machines and still get lots of variety in the espressos that you brew.

Usually Nespresso machines take lacquered aluminum capsules that are for single use however some third party capsule manufacturers use plastic which keeps costs lower. On newer Vertuo machines bar-coded capsules limit third parties from making capsules to ensure the espresso produced is up to Nespresso’s standards.

I’ve also got a few dedicated product reviews for some of the Nespresso machines. Some of those reviews are listed below.

You should also keep in mind that in 2014, Nespresso started a new line of products known as the Vertuoline. This line uses different different capacity and shaped capsules that are not compatible with the other machines known as “Original line” machines.

To this day Nespresso units come in one of the two varieties. You can use original style capsules in units like the Lattissima Plus, Expert, or CitiZ for instance but models like the Vertuo or Vertuo Plus use the proprietary style capsules from the Vertuoline.

See this post for more on the differences between the Vertuo and Original line machines. Also, you can see this head-to-head comparison for more detail: Nespresso’s Vertuo vs Keurig’s K-Cafe.

Here is my review of the base model Vertuo by Breville.

Which One Should You Go For? Is One Better Than The Other?

There are actually quite a lot of differences between the two! Although seemingly similar Keurig and Nespresso cater to completely different people. If you like drinking multiple large cups of coffee then picking up a Keurig machine or a k-cup maker from a different brand will be worth it. I have a list of my preferred brewers that make k-cup coffee here and a list of budget k-cup machines I’ve reviewed here that you can read through.

If however you like to drink much stronger coffee, shoot straight shots of espresso, or mix espresso with frothed milk to make cafe style drinks like mochas, lattes, and cappuccinos then a Nespresso machine will be right for you.

There are however two other options that you may want to consider if you like to have coffee on some days and espresso on others. That would be the Nespresso Vertuo Pro or the Keurig K-Cafe, both of which are supposed to bridge the divide and make either style of drink from the same pod.

So, the main differences between Keurig and Nespresso coffee systems can be summed up as follows:

Which One Should You Buy?

Honestly, both systems are equally great options for people who like to drink coffee and espresso. If you prefer one style coffee over the other then go with that.

Nespresso units are fancier machines too because they need to brew coffee under pressure, as such their machines do cost more so if you are price sensitive then a Keurig k-cup brewer might be the better choice. You can get a machine for less in most cases and the ongoing cost of buying k-cups will be cheaper than buying Nespresso capsules.

I have both the Essenza Mini on my counter as well as a Keurig K-Mini Plus and I use them both. You just have to understand what your exact needs are, and it becomes increasingly simple to find the right one for yourself. For instance, if you want to make tea as well, the Nespresso is obviously not the right choice for you.

Of all the Nespresso machines available right now I recommend most people consider buying the Nespresso Pixie first because of build quality and value for dollars spent. Of course it won’t brew coffee – just espresso so if you want coffee then you have to go for Keurig.

My favorite Keurig device has to be the new Keurig K-Elite. It is built very well, has a large reservoir, offers strong-brew options and multiple cup sizes at the touch of a button but it is a little big… that’s why I have the K-Mini on my counter.

Also, make sure to see my comparison of the Keurig machines to the Hamilton Beach Flexbrew machines here. The Flexbrew machines are affordable alternatives to the more expensive Keurig models and some will also give you the ability to brew full pots of coffee too.

Here are a few more related articles that may help you decide what units you may be interested in: