I’ve been an avid Nespresso user for since late 2017 and the first unit I bought was the Inissia followed shortly thereafter by the Essenza Mini.

When I made that second purchase I really came close to buying the Pixie instead because I figured it was a better unit due to the higher price tag.

Soon thereafter however I started wondering a very common question. This questions has since been posed to me here at GBC virtually every day since: What is the difference between the Essenza Mini and the Pixie anyway?

Obviously the Pixie costs a bit more and the Essenza Mini is marketed as their most compact model but is that really it?

I did some digging and eventually I purchased the Pixie as well (I’ve got a problem, I Know)… and now I know exactly what sets them apart! I can now summarize the differences for you.

The Nespresso Pixie vs the Essenza Mini

The main difference between these two espresso machines is that the Pixie is a bit heavier and durable housed in an aluminum casing that can hold 20% more water in the reservoir and almost twice as many spent capsules before needing to be emptied. It is a bit more expensive and a tiny bit louder than the Essenza Mini but the quality of espresso is exactly the same between the two units.

Around here I like to recommend most people to buy the Essenza Mini because it works great at a lower price but there are a number of lesser reasons why the Pixie my be a better match for you in your home so lets explore those reasons and points of differentiation in greater detail below.

Below I’ll be explaining the differences between these models in sections. You can jump to any section you want using the following index of links: 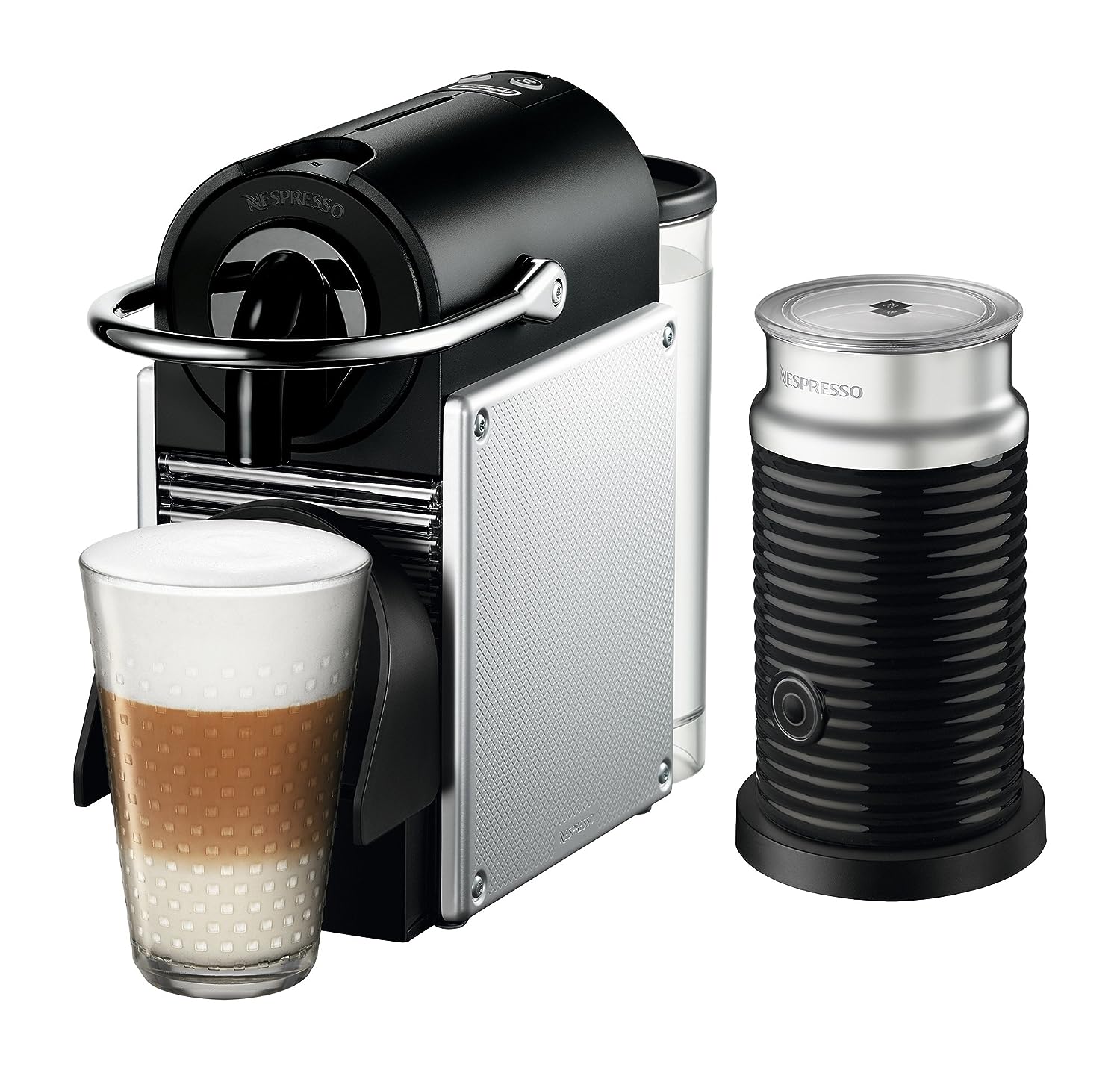 Build Quality & Casing
The Pixie is an older model but it’s made to a higher standard than the Essenza Mini and their other entry level Nespresso machines such as the Inissia and the CitiZ.

Its casing is aluminum which is a notable upgrade from the plastic casing on the cheaper Esssenza Mini and Inissia.

Additionally the casing and body of the unit is heavier and simply feels better and stronger.

The Pixie weighs a full 1.5 lbs more. That doesn’t seem like much but considering how skinny the Essenza Mini is compared to the Pixie it’s somewhat easy to tip over. I’ve done it twice already!

The Pixie is simply more sturdy due to increased weight and width.

Usability Differences
One of my favorite things about using the Essenza Mini is that it is noticeably quieter than the Pixie and the other low priced alternatives.

From what I can tell this is the newest model in the Nespresso Original line of espresso machines and although it still uses a similar 19 bar pump to operate it just does it better and quieter. It’s not really faster and doesn’t produce a better quality espresso in my opinion but the improvement in loudness is a big selling point to me.

Additionally I love the new design of the capsule handle. It goes up and down without moving the spout in and out like the older models do.

On both the Pixie and the Inissia the espresso spout literally moves in and out as the lever is raised and lowered. This sometimes pushes mugs around when I’m not paying close attention. This isn’t a big deal but I do think the new lever on the Essenza Mini is an improvement.

Related: The Pixie vs The Inissia

The drip tray however is a big disappointment on the Essenza Mini when compared to the Pixie. The Pixie’s drip tray folds up for larger mugs, something not possible with the Essenza.

For me this comes into play when I plan on brewing a couple of lungo shots back-to-back into a regular coffee mug. With the Essenza I just can’t do this unless I use a special short mug. This limitation is annoying because I do this frequently, at least once or twice a week. 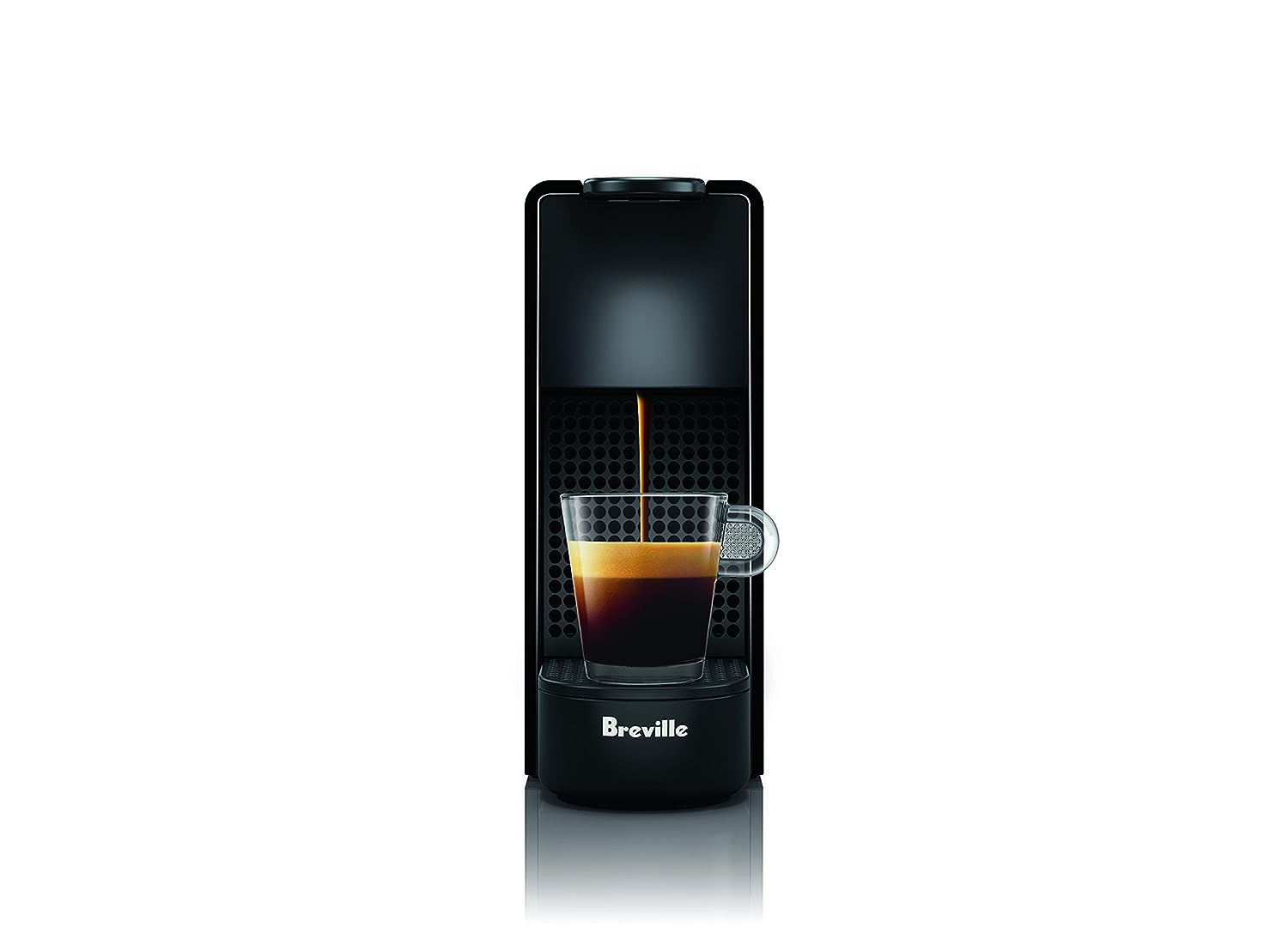 Capacity & Size
Obviously the Pixie is larger than the Essenza Mini and for some this is a bad thing but having brewed thousands of capsules since 2017 I can tell you that I think the extra size in the pixie is worth it!

On the Essenza Mini I can only hold roughly 5 spent capsules before having to empty the chamber. That means I have to empty it every day or so because I usually make 3-5 capsules a day for myself and my wife.

The Pixie on the other hand holds twice as much, roughly ten used capsules!

Not only that but the drip tray is also smaller on the Mini and it fills all the way up nearly to the brim more often than I care for, presumably due to it’s super small size.

The water reservoir is also 4oz larger on the Pixie (which isn’t a big difference) but this does represent a 20% increase in water capacity.

For me, I hate having to refill the reservoir (even though it’s easy to do) so the Pixie is nice in this regard.

Looks & Design
The Pixie has more options for looks although many of those options are quite similar.

It is made by both De’Longhi and Breville and comes in a few different styles of metallic silver: Titan, Electric Titan, and Silver.

In contrast the Essenza Mini is also made by both Breville and De’Longhi but both manufacturers use different shaped cases to encapsulate the inner-workings of the machine.

Breville’s unit comes in only black and it’s shaped like a very sleek and skinny rectangle while the De’Longhi models come in a triangular shape in a few different colors: black, green, and red.

For me I prefer the piano black Breville model but many others would prefer the other style.

Performance and Espresso Quality
This is probably the area where the two units are least differentiated.

I’ve used both so many times and I cannot tell a difference between espresso brewed from the the Pixie vs the Essenza Mini.

They both heat up similarly fast, they both take just as long to brew, they both create similar crema or head on the espresso, and they taste basically the same.

If this is your only concern then definitely the cheaper Essenza Mini will be a better choice for you over the Pixie.

Is the Pixie Better Than The Essenza Mini?

The Pixie is a great model from their entry level products. It is bordering on $200 most places these days compared to the mid $100’s for the Essenza Mini.

With the Pixie you are paying a premium for a larger unit that can hold more water and spent capsules.

It’s a bit easier to brew into larger cups and it is more stable on your countertop.

It’s also got the aluminum case which is a nice luxury that the Essenza Mini can’t boast.

These points alone may not be worth spending the extra money on the Pixie considering the espresso quality is basically the same in every way. If however you do actually prefer a model to be made with a durable metal body that will hold more capsules and water then the extra cost may be worth it.

For me I actually prefer using the Pixie most of the time because it’s bigger but at 5:30 in the morning I always brew from the Essenza Mini because it doesn’t disturb sleeping wives and children as much.

You can see current pricing for the Pixie here. It’s obviously not wildly overpriced so it may be just what you are looking for.

For comparison purposes you can see just how much less the Essenza Mini costs on Amazon right here.

For most people however I recommend opting for the Essenza Mini because it’s priced lower, makes espresso just as good as the Pixie, and it’s not nearly as loud. Your values may vary however.

Is There a Difference Between the De’Longhi and Breville Models?

From my experience the different brands that make Nespresso products are all basically the same and in fact there are more than just De’Longhi and Breville.

De’Longhi & Breville make the Nespresso units sold to North American markets like the USA but over seas in Europe and the UK companies like Krups and Magimix make the units.

Overall each company makes different colors and slight variations is case styling for the Nespresso units but the interior of all units uses the same high quality components resulting in identical brew quality from one manufacturer to another.

In other industries it’s common for some units or parts to be made in different parts of the world by different companies but it’s not always clear when this happens.

With Nespresso it’s different. Each manufacturer is easily identifiable on the products sold but it’s really only a regional thing with a slight slant on the aesthetic design.

One of the biggest design differences between the companies is probably the shape of the Essenza Mini. Breville makes theirs with a rectangular design while De’Longhi takes a more triangular approach.

Overseas Krups has a white version of the Breville design while the Magimix models more closely resemble those from De’Longhi.

How Do You Take Your Coffee?

I like mine black and my espresso with a touch of cream from time to time.

Usually the sub-$200 Nespresso units do the job just right but when you need or want a fuller cup or regular Joe did you know that Nespresso has a few options for you that may be better than any Keurig device?

Make sure to see this post comparing Nespresso to Keurig to see just how Nespresso can serve all of your needs.

You may also want to give a look into the Nespresso Expert which is an alternative to the Pixie & CitiZ. It will make espresso just like the Pixie but it also has a long black or Americano option where it will brew a shot of espresso and then top it off with straight hot water.

In my opinion this is awesome – you don’t have to over-extract a capsule just to get a deeper cup of pseudo-coffee, just make an Americano and call it a cup of coffee and all but the snobbiest of people will be able to tell the difference.

You can see my comparison of the Essenza Mini to the Expert right here.